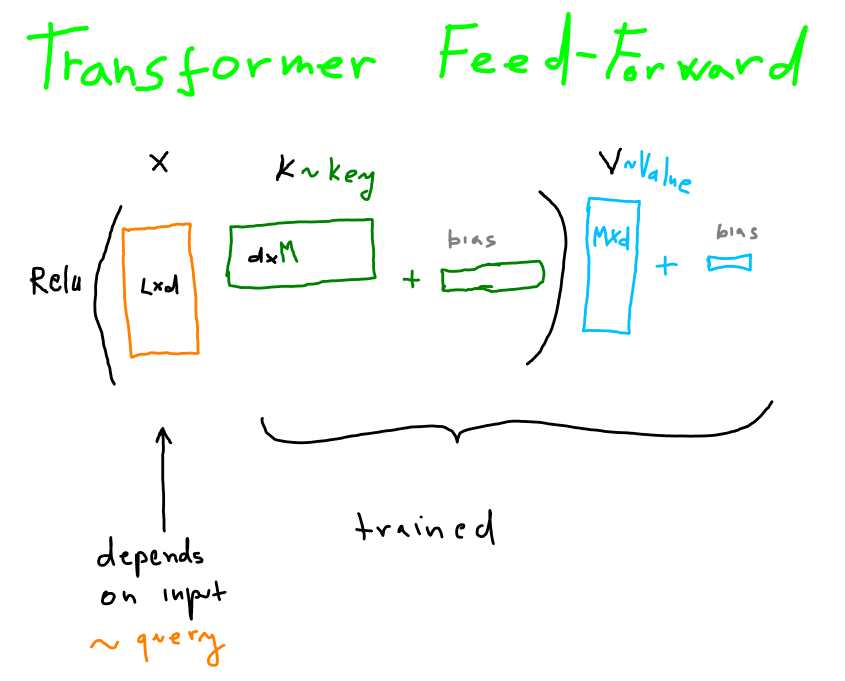 The last post on LambdaNetwork sketches self-attention as a differentiable query of a key-value store. The Transformer’s feed-forward sublayer is similar to the cross-attention attending to a separate sequence via key and value input. So, it is a bit like differentiable key-value memory.

Can we gain more understanding of Transformer model operation by looking at the feed-forward layer?

Where is Feed-Forward Layer?

Where is Feed-Forward layer within the architecture exactly? Feed-forward layer camps within encoder and decoder layers as a sublayer just behind the self-attention sub-layer.

What is Feed-Forward Layer?

Have you noticed that the feed-forward sublayer is akin to key-value memory of the self-attention except for non-linearity is ReLU and bias-terms \( b, c \)? 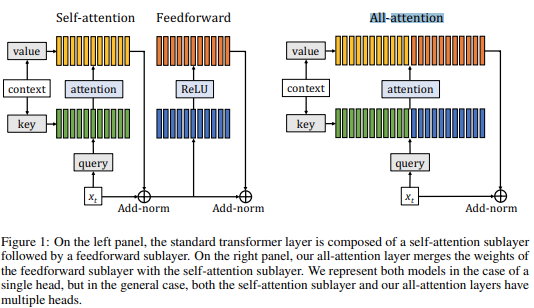 But does the feed-forward sublayer really behave like key-value memory not only talk a talk?

In Transformer Feed-Forward Layers Are Key-Value Memories authors show that feed-forward layer does walk the walk of a key-value store.

The paper studies activation of feed-forward keys for the last position of the input sequence. The activated keys are keys with top-n ReLU outputs for given feed-forward sublayer. For most of the keys in the feed-forward sublayers the authors found one or more human-interpretable input text patterns for which the key in feed-forward was being activated. Text patterns ranged from simple exact word matches (e.g. last word is “substitutes”) to more complex topics (e.g. “one of”, “part of”, “among”). Authors also observed that the upper layers memorize more abstract patterns.

Unfortunately not all samples are provided in the pre-print. Furthermore, they report they found more than one pattern per key. Were those patterns referencing a single topic or disparate topics? If single key was associated with multiple topics, can we still look at it as a memory cell?

Activated feed-forward values predicted model’s next output tokens in higher layers only, but not in lower layers. Typical example activated tens of memories which were then aggregated (non-zero coef mems). The model output vector differed from all single memory predictions (single value vectors) 68% of the time. Remaining 32% are perhaps stop words and a like. The feed-forward residual connections predicted next output token increasingly in the higher layers. Could be that the internal embedding space is changes between layers? Is the model refining its prediction from layer to layer?

They additionally observed that top-1 predictions of sublayer residuals mostly not match feed-forward. These sublayer-outputs seem to not agree but rather compose. Does feed-forward dampen or “veto” residual vectors towards other candidates? In 66% adding feed-forward to residuals changed prediction is to a semantically unrelated word. Is this used by the model for predicted sequence re-arrangements?

The ROME paper develops a technique for locating memories and associative rules in GPT transformer for specific facts ,e.g. Eiffel tower is in Paris. Additionally, they introduce a technique for editing these memories without rest of the model.

Lambda Networks Transform Self-Attention
Is Lambda Layer similar to self-attention in a Transformer? What gives LambdaNet its power? LambdaResNet beats EfficientNet but does it loose to Performer?