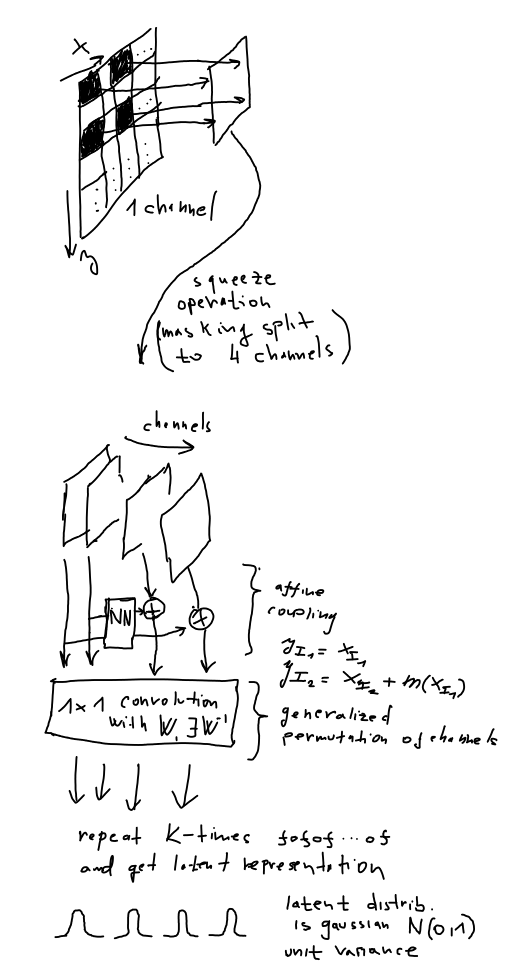 Flow-based (normalizing flow) models are the odd machines in the corner of the neural network laboratory capable of calculating the exact log-likelihood for every sample. Discover their arcane qualities on a representative example of OpenAI’s Glow and its ability to unveil secrets of visual illusions. Note that you can create interpretable latent representations also using disentangled representation training.

Flow-Based Model vs VAE and GAN

Advantages of flow-based models are:

Flow based models have similarities to diffusion models like DALL-E 2 or GLIDE.

The goal is to find an invertible function \( F \), which under assumption of multi-variate normal (gaussian) distribution with isotropic unit variance (Independent and Identically Distributed) on the latent space gives maximum likelihood. The change of variables of probability density function formula means that above is equivalent to minimizing below.

We choose the function \( F \) to be composed of multiple simpler learnable functions \( f \).

Then transformation called affine coupling below can be inverted. Additionally, inverse calculation costs as much as forward.

Determinant of Jacobian of above transformation is non zero and cheap to calculate by design.

With above can apply non-linearity to just half of the dimensions. We perform additional learnable invertible linear operation \( W \) to remix them before non-linearity is applied in each layer. Since \( W \) maps only in the channel dimension and not in the spacial, it can be interpreted as 1×1 convolution. This gave the Glow paper subtitle “Generative Flow with Invertible 1×1 Convolutions”.

The non-linear functions \( s \) and \( t \) in above are convolutional neural networks. They are constructed to have sufficient number of features, such that number of input and output channels are equal. But how do we go from an image to required number of channels for above to make sense? We create 4 new channels by splitting the image into four parallel images via skip-one-pixel sub-sampling.

On the latent space it is possible to identify directions correspoding to change of certain semantic attributes. For example there is a direction into which face could be modified to smile more. This is an example of a disentangled representation.

Ability to calculate the exact likelihood has surprising application in the study of human experience.

A paper has a statistical story of visual illusions to tell thanks to the Glow model. The paper focuses on a common misjudgment of color brightness of image centers in which background was darkened or lightened, as shown in the image below. The misperceptions seem to arise due to the visual system highlighting unlikely parts of the images. The authors study this by changing the brightness picture’s center and calculating the likelihood of created samples.

For example, in the image below, most people perceive the two middle patches as having a different color. This phenomenon is called simultaneous brightness contrast. The brain here seems to err on the side of contrast, tricking us into seeing patch colors more differentiated from the background. You shouldn’t believe me that two images below contain the same image patches in the middle. Download the image, cut out the middle sections, and move them next to each other to verify that they indeed are of the same color.

In another example in the paper, they claim that the likelihood of a patch having lower saturation than the actual value is the true measure of human color saturation perception. They call this quantity percentile rank. I did one more experiment, which I was missing from the paper, testing this hypothesis. I increased saturation on one of the samples by 24%, such that the percentile rank would match on both images, and now I see the same colors! Do you?